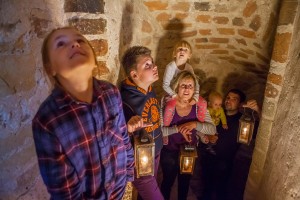 The origins of the city of Cēsis goes back to 800 years. They are connected with the medieval castle of Cēsis, around which the city was formed already in the 13th century.

In the light of candlelight, you will be able to see the West tower of the castle and the master’s living room in it – a unique 16th century interior with a luxurious star vault, artificial stone vault consoles and fragments of wall paintings. On the third floor of the tower, during the summer season, a unique multimedia exposition “The State of Cēsu Castle” can be seen. From the attic floor of the tower there is an impressive view of the other parts of the castle ruins, the forecourts, the Castle Park and the city. The exhibition “Life on a powder keg” can be seen in the southern tower of the castle. Using the possibilities provided by modern technology, the exposition installed in the tower reveals in an exciting way the stories of the historical persons who were once imprisoned in the prison installed in the basement of the tower, and also explains the importance of Garās Hermanis in the defense of the castle. In the summer season, the exhibition of the medieval kitchen garden in the palace garden can also be viewed.

That is made especially for families with children 5 to 10 years old. With the help of backpack it is possible to reveal secrets of this powerful castle. This backpack is filled with illustrated activities and task pages – materials, collected by the bat Walter. Ask for Activity backpack in castle information centre.

During the summer season, visit the play area built in the garden of the Castle to give children an opportunity to acquire a variety of children’s favourite medieval games and plays that exercise their skills, strength and mind under the guidance of the Castle games master. In the play area, the games masters have provided appropriate activities for both children and adults.

Walk on wooden legs, play pulling games, play mills, try on real armour and participate in many other activities which are depicted by the 16th century Flemish painter Pieter Bruegel in his painting “Children’s Games”.

More you can see HERE 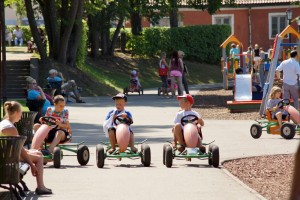 Maija (May) Park is especially suited for relaxing together with children. During the summer time, lit up fountains and couple of black swans delight every visitor of the park. 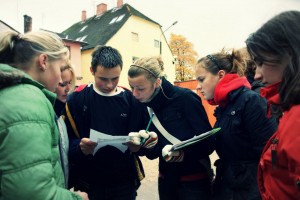 Medieval run is a set of tasks and questions connected with history, literature, art ingenuity and concentration, and answers can be found in Cēsis city streets.

Route includes the most important historical places in Cēsis. Start and Finish are at the Cēsis Tourism information centre, the amount of points will be written in commemorative diploma.

Medieval run is more interesting if company is divided in two or more teams, and it is turned into kind of a competition. 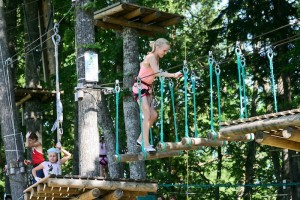 “Supervāvere” is a park with three obstacle courses in three different levels. It is located in Ozolkalns – in the trees with a wonderful view to the Gauja valley. There are more than 60 obstacles in the park

Tracks are suitable for anyone who has reached 110 cm in height – from children to seniors. Two of the tracks end by a “free fall”, but the longest – Adventure track stand out with an extra-long cable-descent, which reaches 250 meters. The park opens in late March and runs until the end of October. To start the route, everyone has to accomplish the training with an instructor.

Parallel to the visit of the Supervāvere you can have a picnic by the bon-fire. 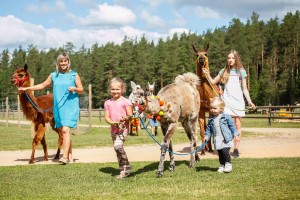 Camel Park "Rakši" is located 7 km from Cēsis and is home to more than 150 animals. Camel rides, llama walks, donkey cart rides, face-to-face lemur feeding and many other activities are available at "Rakši".

In the Camel cafe, visitors can enjoy healthy pancakes and delicious ice cream with camel milk, as well as spend the night in a concept hotel decorated in Moroccan style.

You can see more HERE 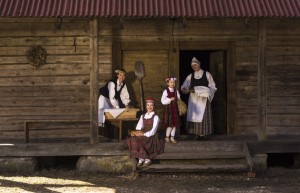 Maizes māja (Bakery) is the place to participate in real procedures of baking the farmhouse bread, to make dough and bake pies, to study the grain, grain products, Latvian strength marks and explore the bread-related traditions.

The hosts also offer extended life skills program with the soup made in the fire, adventurous tour in the Gauja National Park, campfire bread, sleeping in their own tents and enjoy the heart shaped pancakes made by the hostesses.  During the events for adults, there is an opportunity to taste the owner’s home-made wine in the ancient barn. For nearly 100 years the bread with the taste of freedom is baked in the oven of the farmhouse – the cheerful hosts of the farmhouse will tell you all that best of all.

You can find out more HERE 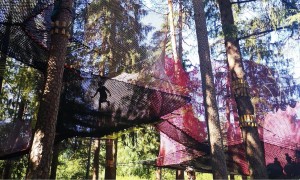 Zeit is a great place to relax with the family! Go on an adventure in the tree kingdom! Enjoy a unique feeling of freedom and fun activities for young and old. In the 4-7 m high labyrinths of nets, you can break out, as well as let go and relax. In the net park, all passages, bridges and squares are surrounded by 2.5 m high net walls.

A 30% discount applies to groups of more than 10 people. 3+ card holders – 20% discount. Free entry on birthday with ID. For persons with a disability certificate and a companion – entry is free!

A small network park and a playroom are also available in the indoor spaces of the Zeit creative quarter – free of charge!

You can find out more HERE