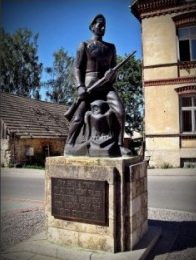 Monument for students in Cēsis Regiment

The restored monument is situated in the area between Palasta Street and Bērzaines Street. The monument represents the place where the Students took the road to the front line of the famous Battles for the freedom of Latvia on 6th June 1919.

The Cēsu Battles that took place in the summer of 1919, when the joint Estonian and Latvian troops defeated Latvian and Estonian statehood threatens - German Landeswehr and Iron Brigade, is one of the brightest episodes in our country's history. The victory in this battle strengthened the independence of Latvia. In Estonia, the victory in the Cēsu Battles is celebrated as a major national holiday - Victory Day in Landeswehr war. The Northern school youth – the Students of Cēsis Regiment also participated actively in the Cēsis Battles. The monument was opened on 26 May 1938, but 12 years later, the monument was seen as a challenge to the Soviet regime and was dismantled. During the time of “Atmoda” (Revival), the Monument for Students in Cēsis Regiment was recreated, and it was unveiled on 11th November 1992.

Nowadays each year, on the 11th November, when Latvians are celebrating Lāčplēsis day, people gather around this monument to start a torchlight march from here.