HomeNews A Visit to the Charming Town of Cēsis

A Visit to the Charming Town of Cēsis

Latvia is not all about the capital. It's more! More of nature, more of small, charming towns, more of historical highlights! David Johnston from travel blog Travelsewhere visited Cēsis in summer, and now he gives an overview about his experience.

As part of my visit to the wonderful Gauja Valley, I planned a day trip from Sigulda to the charming town of Cesis. My time exploring the historic town reinforced how special this part of Latvia is, while furthering my understanding of the history of the country as a whole. Cesis really turned out to be yet another interesting and eye-opening stop in my journey through Latvia. Read on to learn more about what there is to see in Cesis and my experiences there.

The big draw of Cesis for me was probably unsurprisingly the town’s medieval castle. The old castle is the centrepiece of the Cesis Castle Complex and its ruins are the symbol of the town. Dating back from the 13th century, the castle built by the Livonian Brothers of the Sword would later encourage the town of Cesis to be built. For centuries it was known as Wenden, after the local tribe that lived in the area. The castle was destroyed and rebuilt several times through the years until in 1703 when it was not rebuilt and left in ruin.

A truly one-of-a-kind experience that the Cesis Medieval Castle offers is to explore the ruins by candlelight. As the dungeon and stairways of the medieval keep are unlit, visitors are given a candlelit lantern to climb into the ruins at their leisure. This turns a simple visit into something more, giving it an adventurous spirit and really encourages you to take it all in. Mind your step as you wind your way up and down spiral staircases to see the castle towers and dungeons.

As is the way it seems in Latvia, each old castle is paired with a far more modern one. Attached to the medieval castle was a courtly manor house that now hosts the Cesis History and Art Museum, covering a wide variety of local subjects. The castle itself was built in 1777 as residence for Count Sievers who had purchased the medieval castle estate as he did in the village of Krimulda further along the Gauja Valley.

The exhibits in the museum range from the furnishings of the manor itself, to medieval history, the war of independence and even the national flag. Of particular importance is the parts on the Battle of Cesis in 1919, which was one of the crucial battles leading to Latvian independence. I was also intrigued to learn the history of the Latvian Flag and how it was adapted from a local historical flag of Cesis. As it can be seen even from the two above examples, Cesis has long had a key role in Latvian history.

For those that appreciate the interiors and furnishings of stately residences, there is plenty to see in the rooms of the manor. While most rooms host exhibitions, there are several of the rooms that have been left intact as to display the resident’s lavish living quarters. However, perhaps the highlight of a visit to the New Cesis Castle is climbing the castle tower and getting a spectacular view out over the town.

A visit to the Castle Complex is most definitely incomplete without heading down to the stately park that sits beneath the medieval castle walls. Following a descending staircase from the castles, you arrive at a pristine lake, home to statues, ducks and plenty of park benches. It was nice just to go for a loop around the park and admire the medieval castle from another angle.

As followers of this blog and my Instagram will well know, I thoroughly enjoy wandering around places and soaking in the architecture and atmosphere of a place. Cesis is definitely suited to that. Meandering down the town’s cobbled streets you’ll come across plenty of charming buildings and quiet alleys. Cesis is far from a busy place so if the weather holds up it can make for a really pleasant time. Unfortunately, even in summer I was treated to a few showers that had me ducking under cover.

One of my favourite things I noticed in Latvian architecture is their fondness for both wooden panel and red brick buildings. Both throwback to older building styles from the 19th/20th century and seeing them alternated along cobbled streets throughout Cesis just added to the town’s sense of history.

Unlikely to be a regular occurrence, but when I visited I managed to find myself stumbling upon a square that had been take over by a film crew. It was rather hard to figure out what type of movie they were filming since the extras seems to be wearing a wide range of outfits. I couldn’t get too close unfortunately as they had policemen stationed about so I doubt I’ll ever learn what was being filmed there that day. Can you figure out what is going on here? 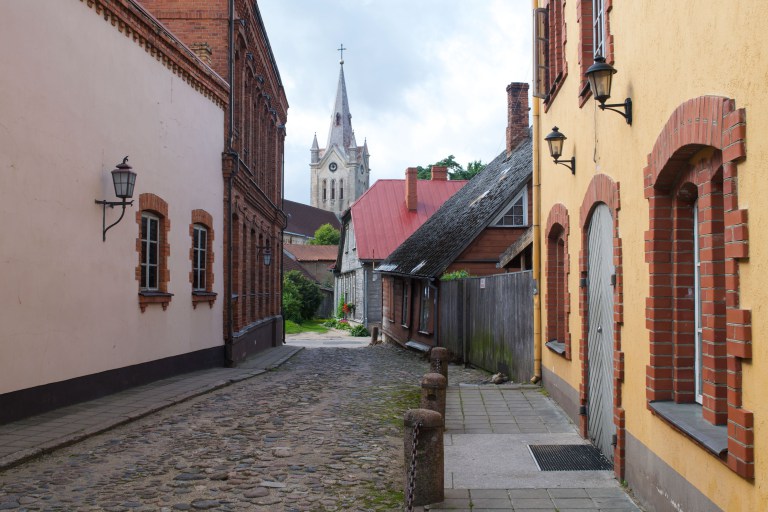